SPS IPC Drives took place at the end of November 2017 in Nuremberg, Germany. This international exhibition attracted attention of tens of thousands of specialists, managers and experts in the field of factory automation. All the participants admitted major advantage of this event—concentrated target audience from the whole world visiting the stands for the information about new products and conclusion of deals. 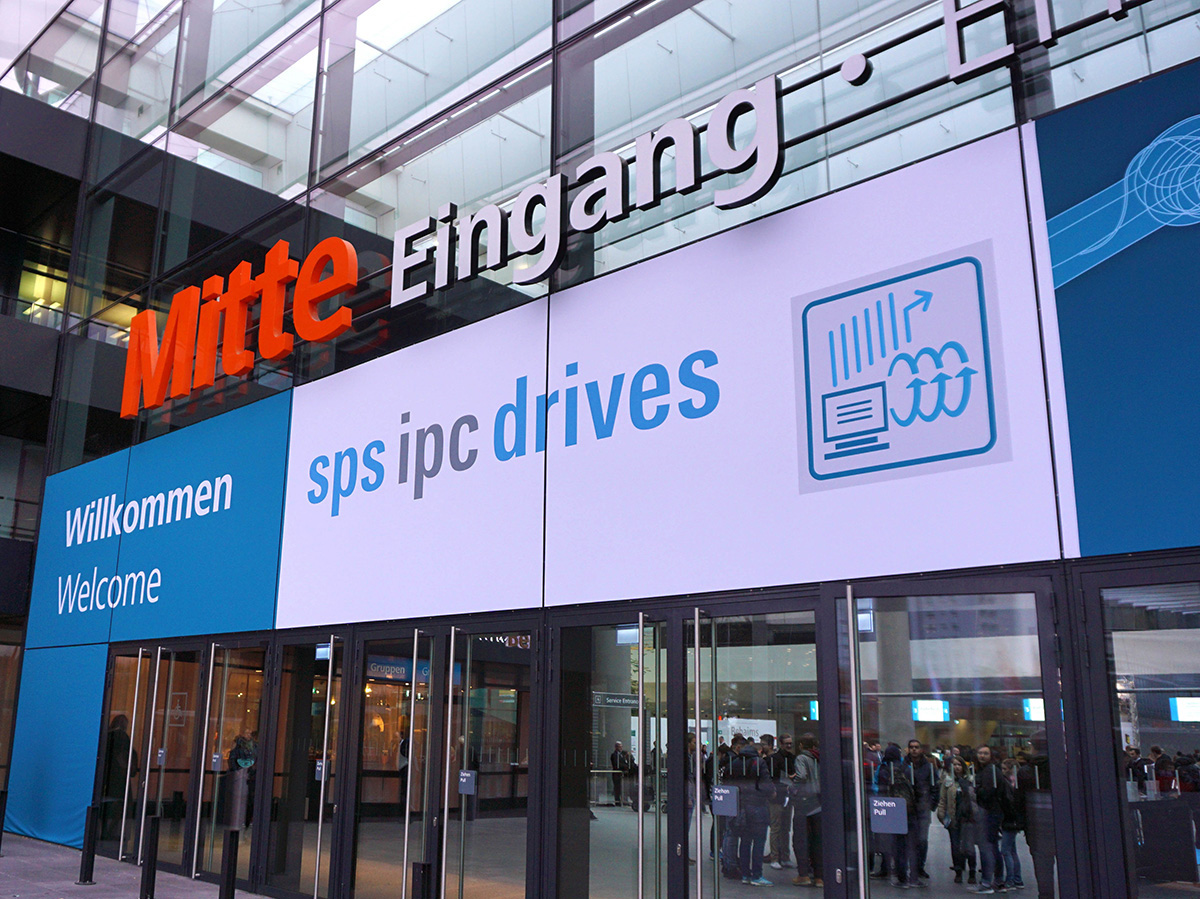 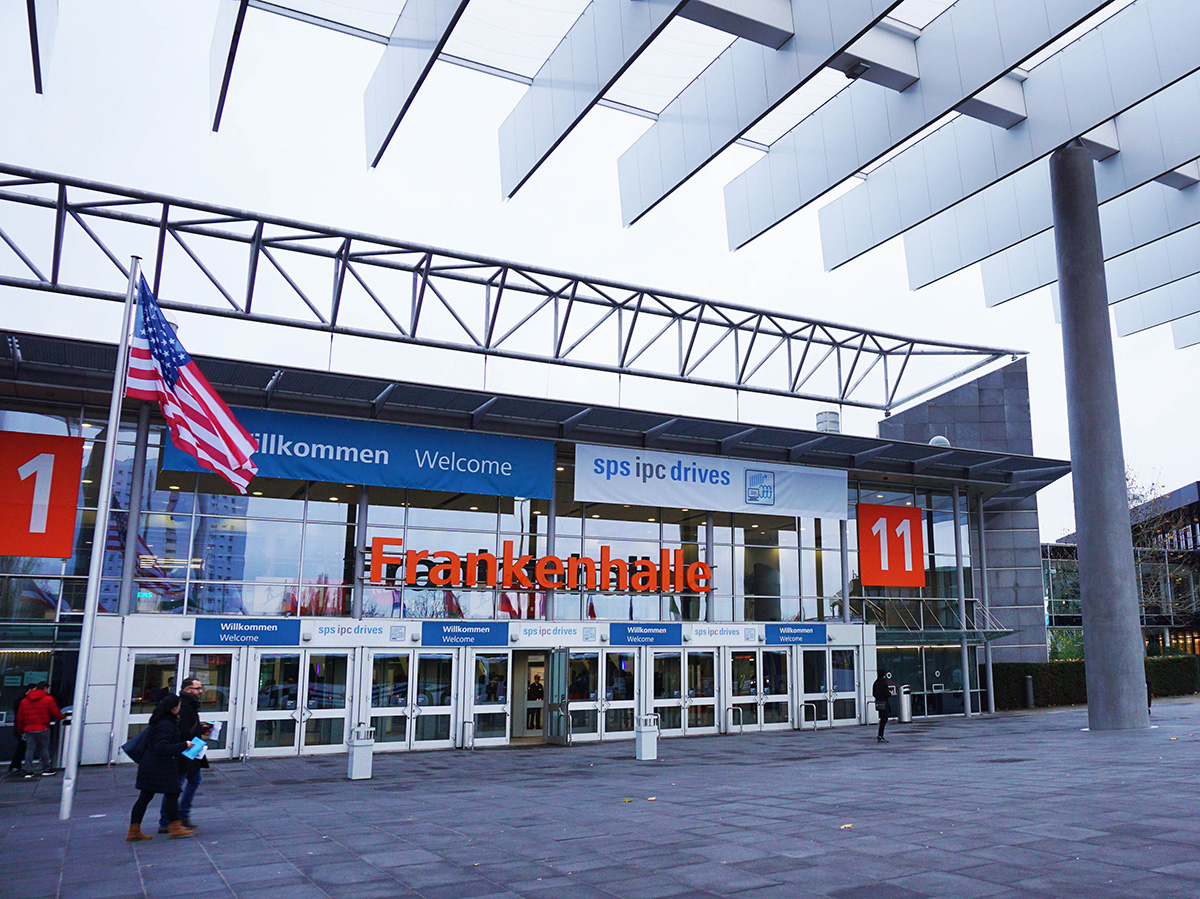 In 2017, the exhibition was dedicated to new development trends in the industrial automation field. The customers of today seek for solutions that are adapted according to their needs, developed in short terms and at minimal budget. For that reason, suppliers of equipment, software and services for factories and manufacturers search actively for ways to use techniques and methods from the IT field to curtail adaptation costs and reduce time for supply of products and solutions to their clients. Cloud technologies, Internet of things, standardization of the protocols for collection and sharing of data, machine learning and processing of big data—here is only a short list of the technologies that will be adopted by automation industry in the near future. 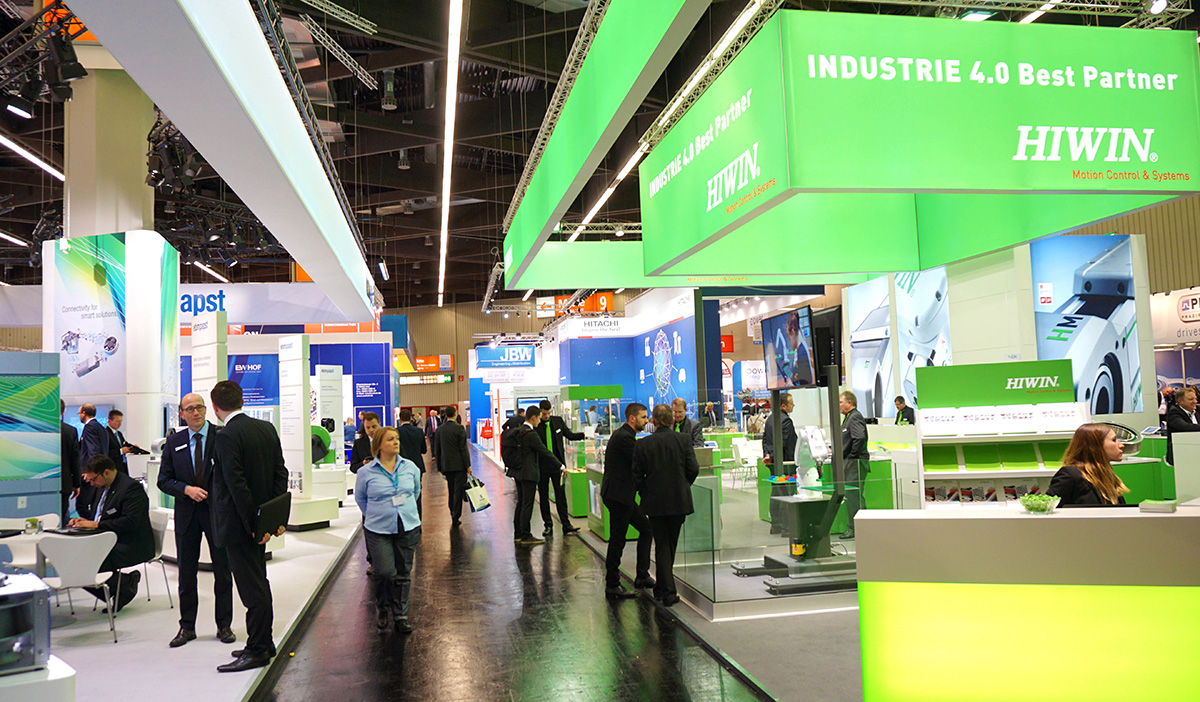 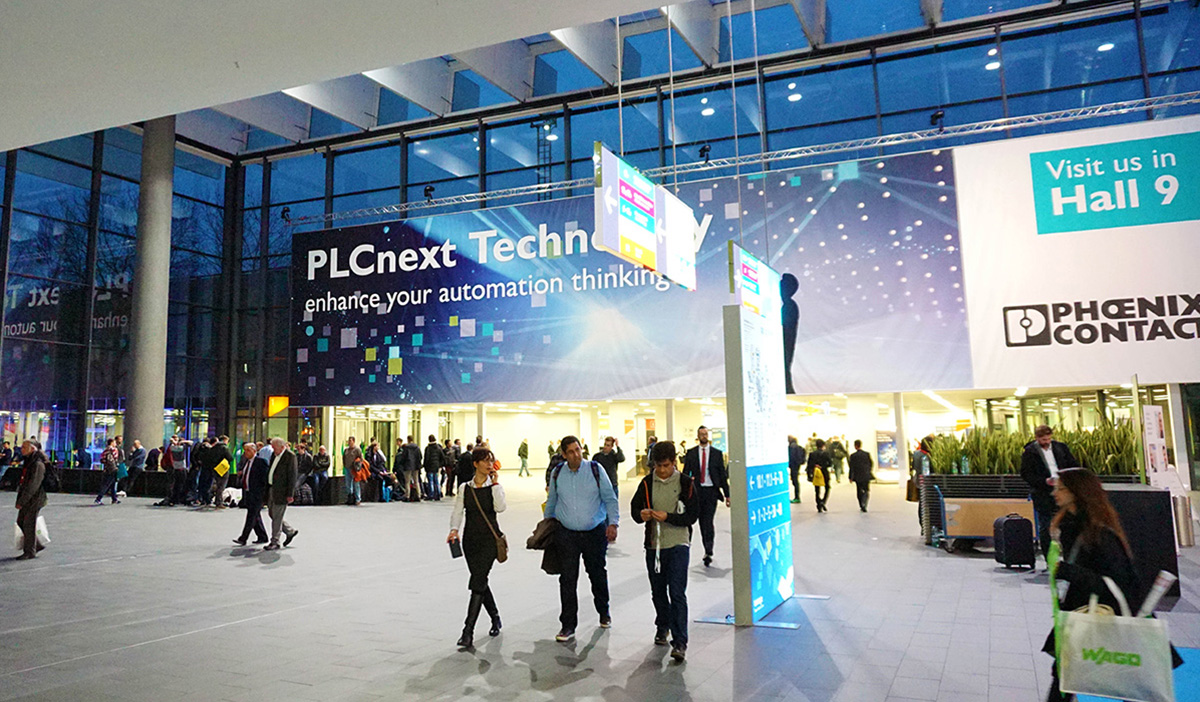 The concept of Internet of things (IoT) in application to the factory automation field means, first of all, an autonomous gathering, processing and distribution of information by the equipment itself (M2M communication) with consecutive storage of the information in the cloud and the access for information systems. Development of standards in this field will ensure interoperability of devices from any manufacturers with no additional integration costs. In the end, that will ensure unprecedented flexibility in purchasing and upgrading the equipment for system integrators and suppliers of solutions for automotive and semiconductor industry, energy, etc. Unfortunately, at the first stage it is impossible to entrust critical production information to the cloud technologies as the aftermath of illegal infiltration into such system will be catastrophic. At this stage, gathering and analysis of the information about life cycle and degree of equipment wear for predicting replacement of parts and other maintenance will be more useful and relatively safe field for the application of the cloud technologies and Internet of things at the same time.

Our Stand at SPS

The central part of the stand was allocated for demonstrating the results of our development works in the Motion field. The KPA Motion library secures a synchronized control of several axes with the application of kinematic model. Developed for the stand, the demo application performed drawing of a vector picture (koenig-pa logo) with the help of robotic hand manufactured by Igus: 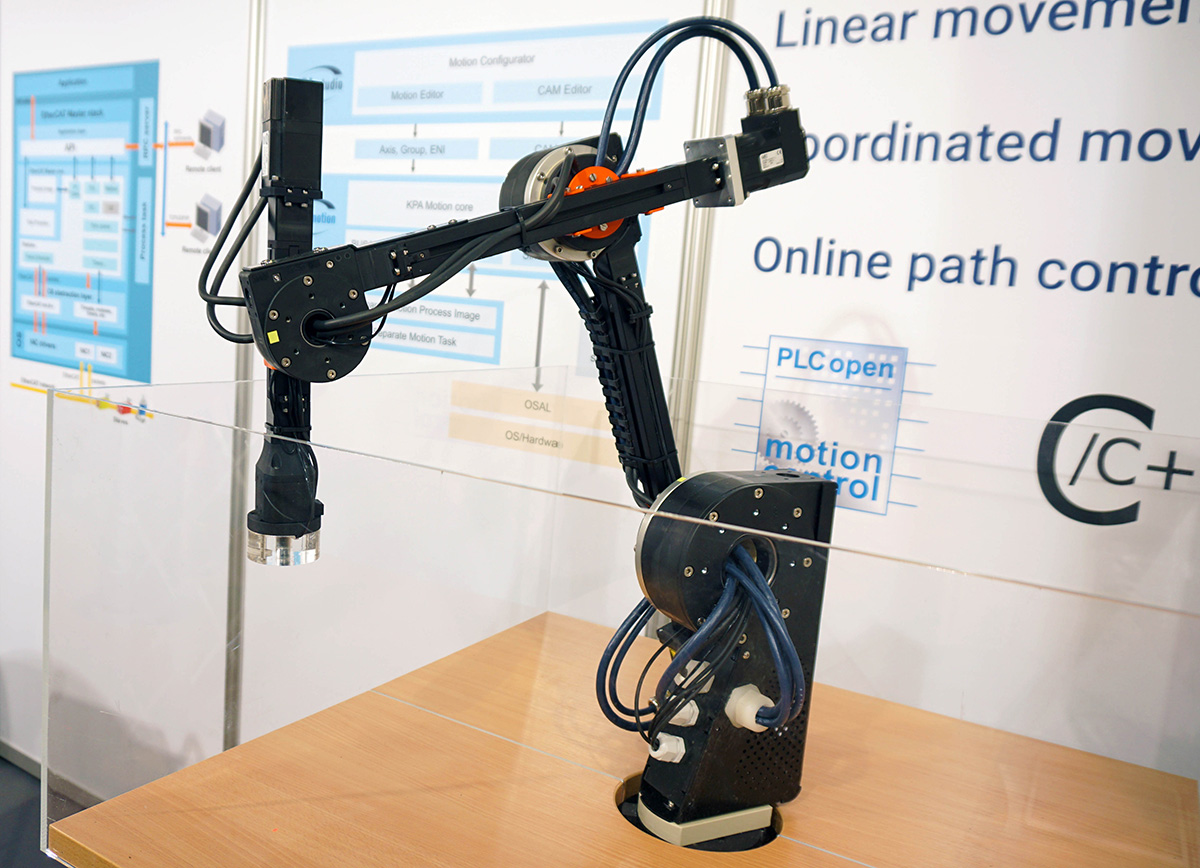 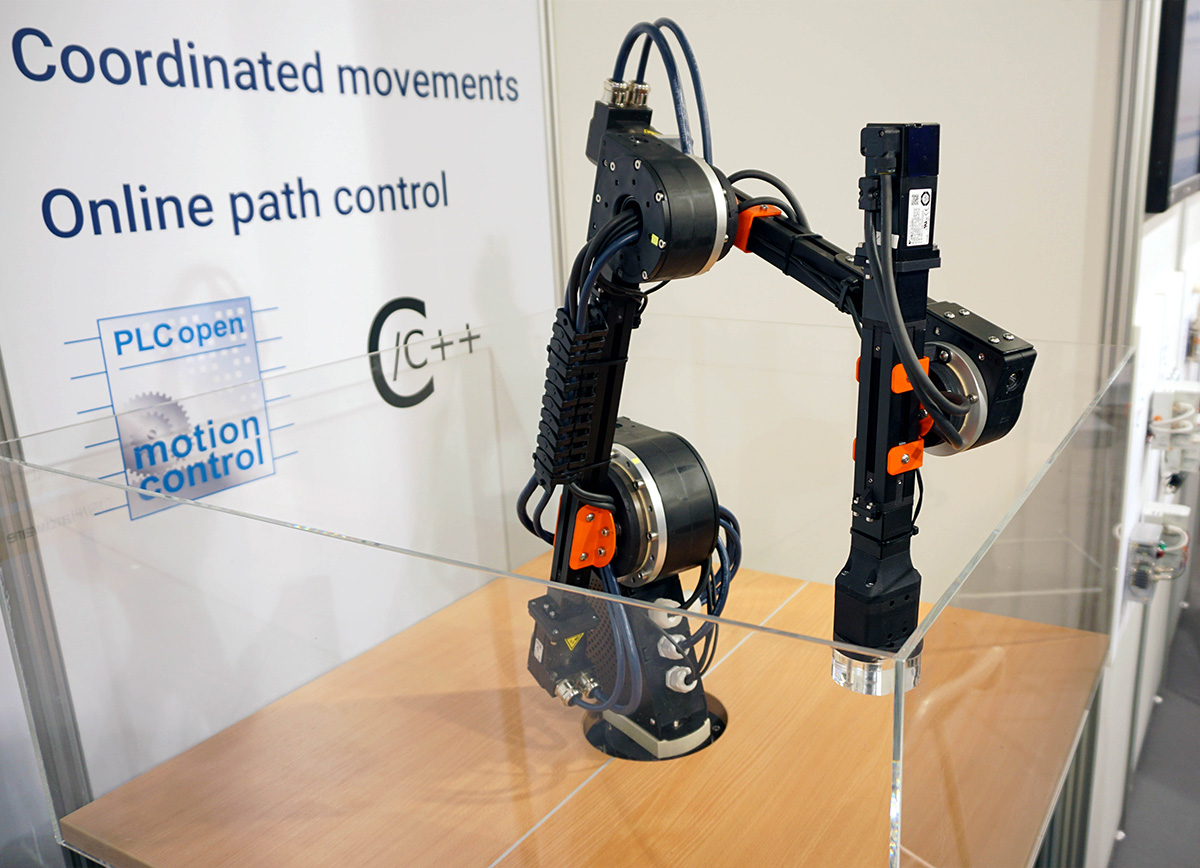 The KPA Motion library is designed for developing efficient and thrifty systems for control of manipulators and moving parts of machines. A variety of supported operating systems and hardware platforms, independence from a manufacturer and drive brand, calculation of an optimal trajectory on the fly, control over several synchonized axes, support of the EtherCAT fieldbus out-of-the-box and function of the simulation for debugging of the motion applications are advantages of the library.

At the second stand we demonstrated another feature of the KPA Motion library—the ability to proxy the functional blocks of motion applications for bringing the control system to a separate real-time platform. Use of such architecture allows to implement business logic of the application on a single physical host that does not operate in real time while all necessary calculations, control functions and work with a fieldbus are executed on other host, for example, as in case of the demo stand powered by Linux + Xenomai. 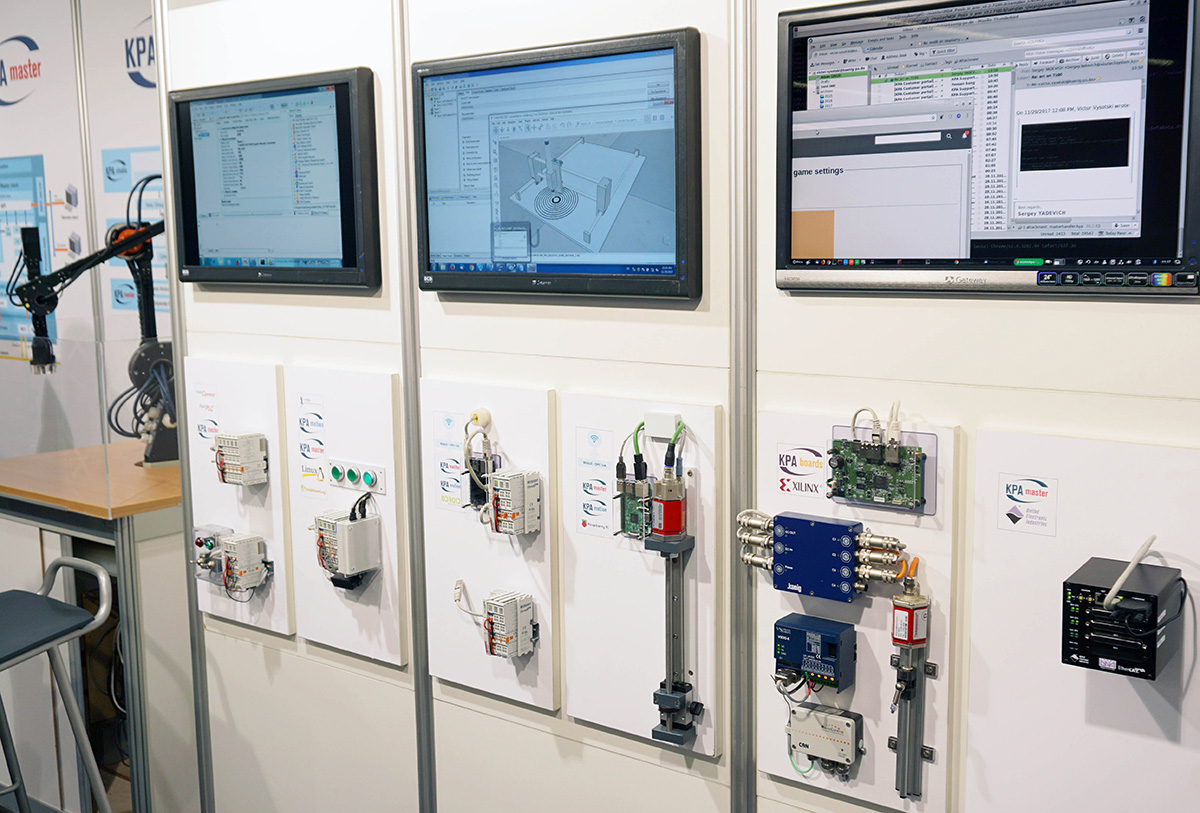 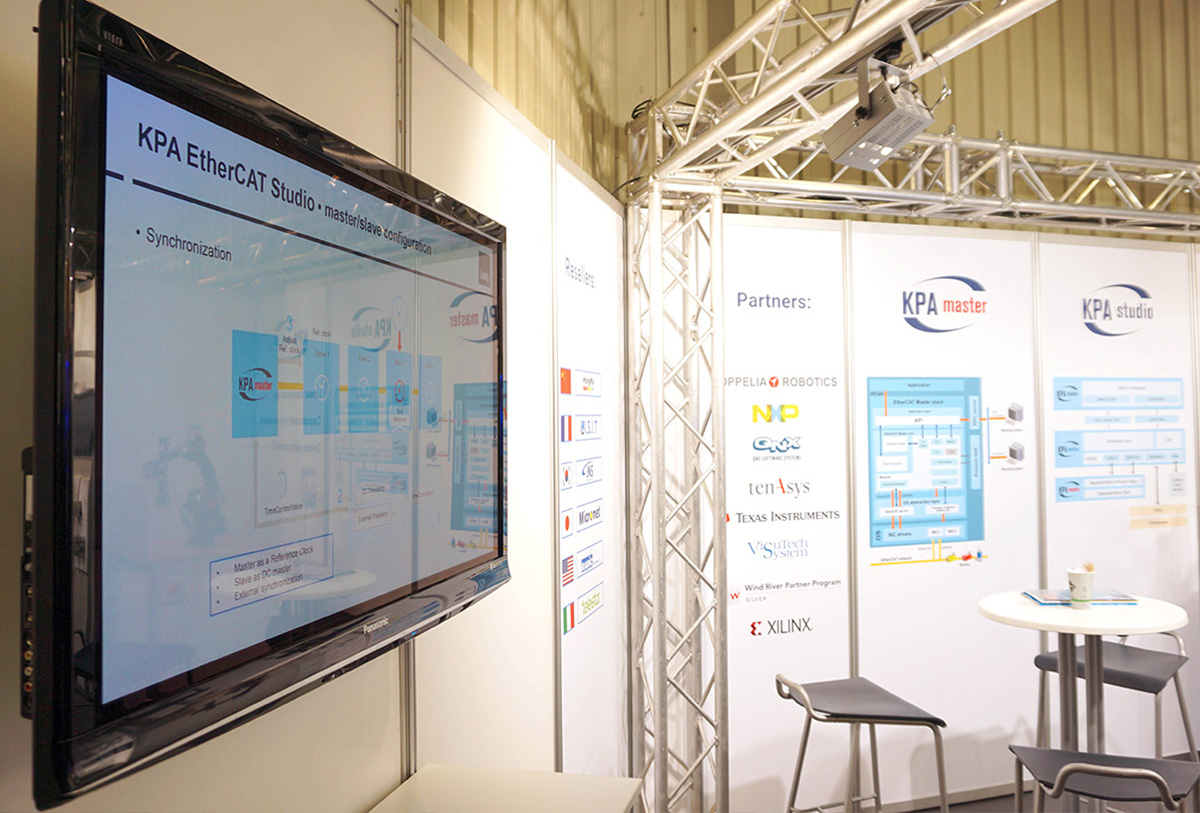 Our KPA Automation development environment allows to create the systems for monitoring and control of technological processes which differ in complexity—from simple and affordable software PLC to full-scale SCADA systems. Our stand displayed a demo project of the control system based on KPA Automation that processed signals from the toggle switches and managed LED indicators connected to the Beckhoff digital I/O modules for the EtherCAT fieldbus. The system includes both software PLC (KPA Automation Control) and its own visualization system (HMI) (KPA Automation View).

At the following stands, we presented the capabilities and properties of our library for the work with the EtherCAT fieldbus—KPA EtherCAT Master. 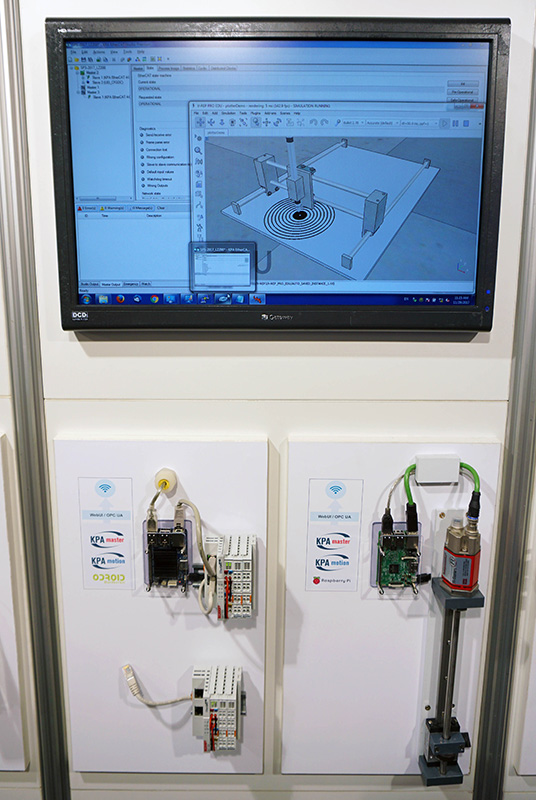 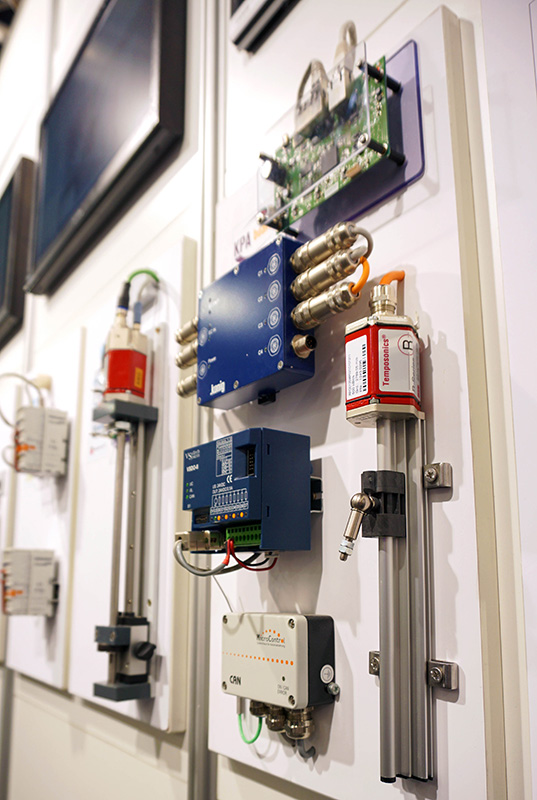 Productive and resource-efficient executable code of KPA EtherCAT Master can be executed on any hardware platforms, even on the low-performance ones. Budget-friendly solutions based on Raspberry Pi and Hardkernel ODROID operating under control of Linux were demonstrated at our stand. An innovative solution according to the IoT initiative—the fieldbus configuration control via the web interface—was implemented in the demo application running on such platforms.

Some of possible scenarios for implementation of this approach including dynamic configuration change of the fieldbus and obtaining access to the sensors in the web application were shown at the stands.

High-speed fieldbus EtherCAT continues developing and attracting new participants in the ranks of its admirers. A big stand of the EtherCAT Technology Group (ETG) was dedicated, among other things, to a great diversity of existing solutions from major players of the industrial automation field. With the help of its partners, ETG organized several impressive presentations. 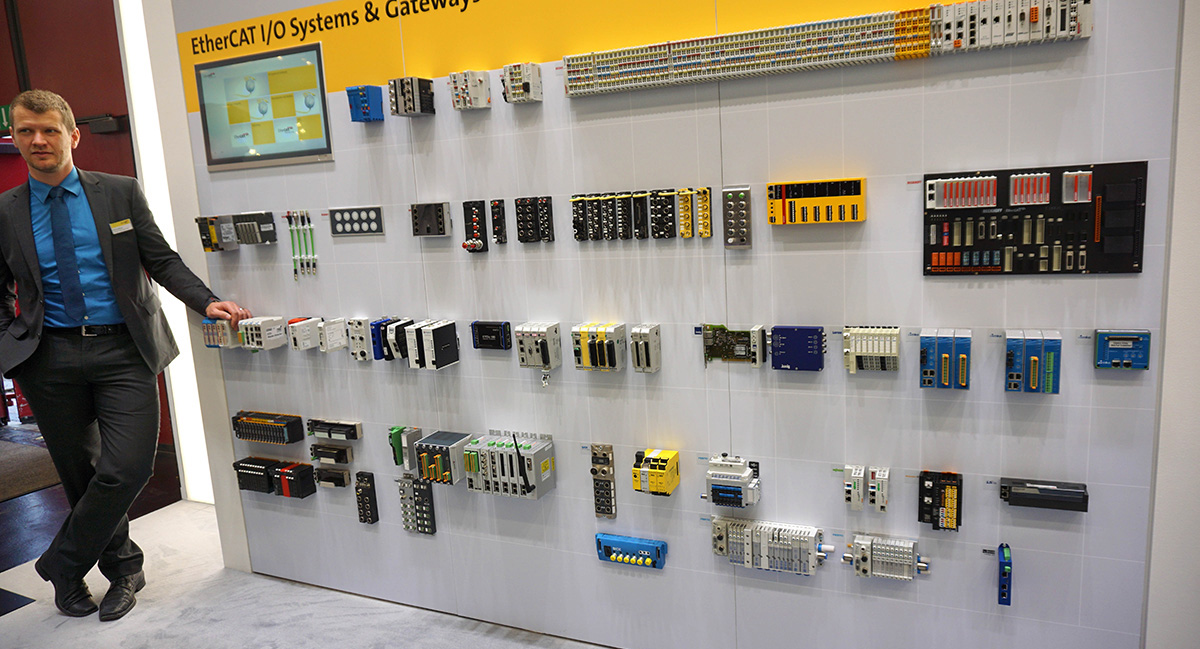 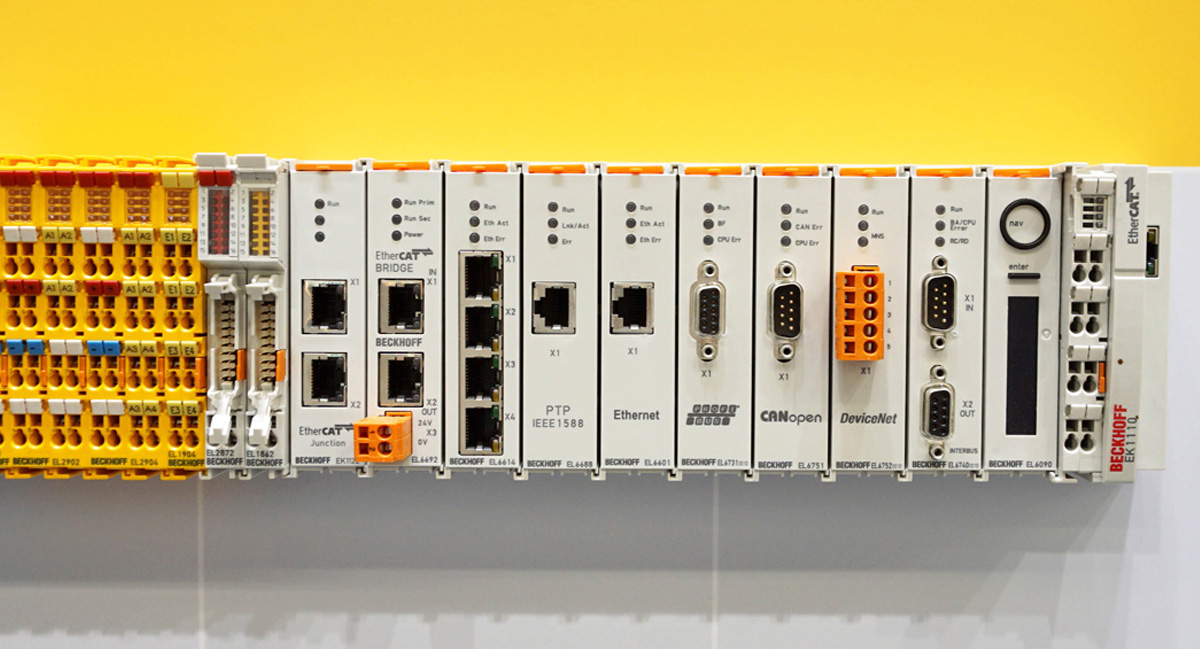 Short cycle time and high speed of data exchange in the real-time mode is one of key advantages of EtherCAT over similar solutions. As an evidence, one could admire how deftly the Kuka robot and the Beckhoff transport system interacted at the ETG stand during the exhibition. 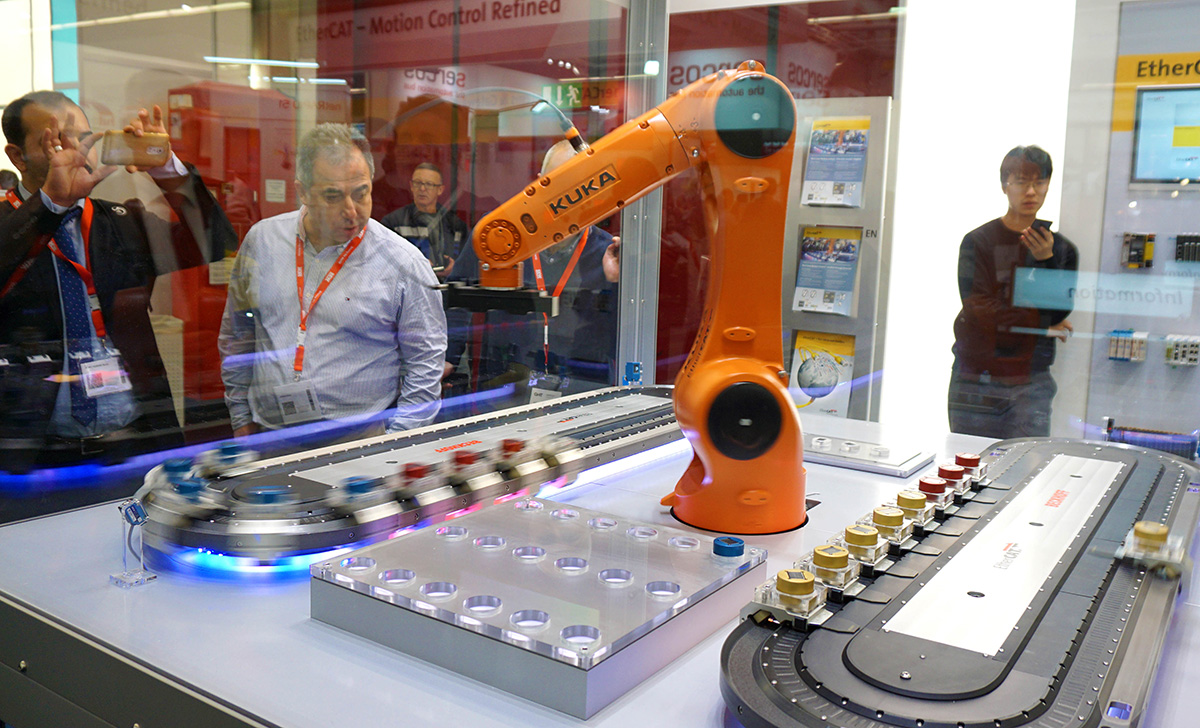 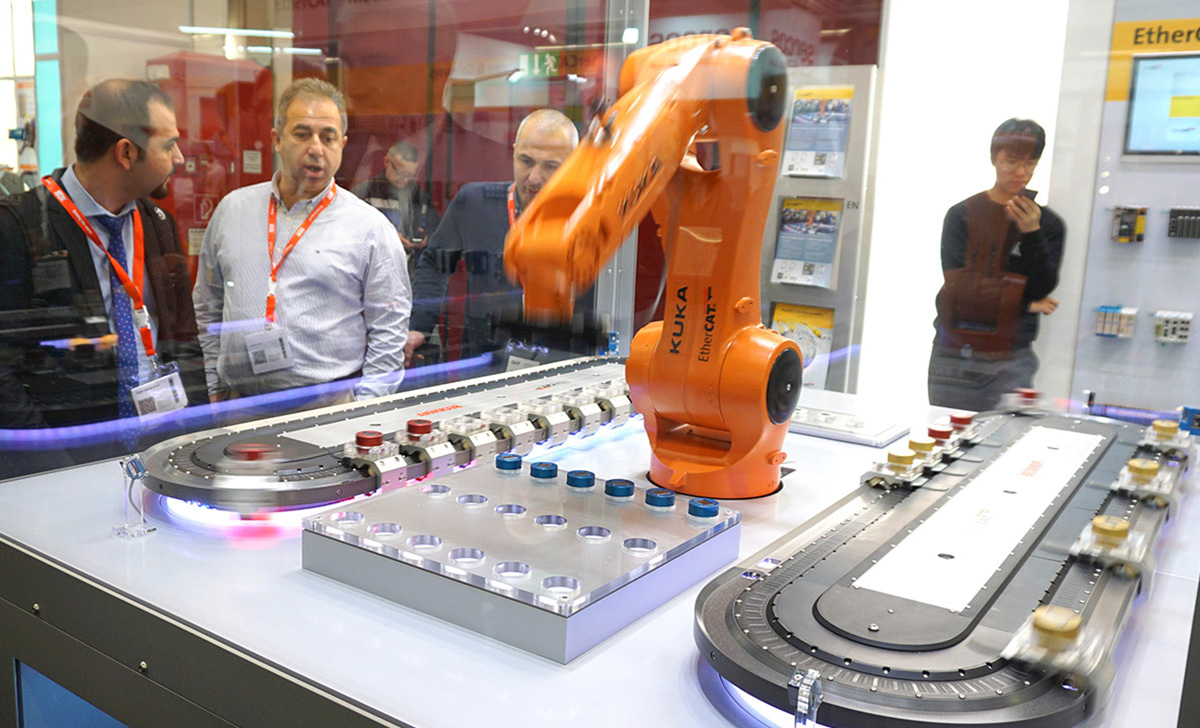 Besides high operation speed of the EtherCAT bus, the results of united work of the manufacturers of drives and control systems were displayed at another stand. These manufacturers are participants of ETG. One programmable controller drove synchronously a group of 35 axes with the controllers from 24 different manufacturers and anyone could be ascertained in the perfect work of this system.

A full-fledged member of the EtherCAT Technology Group, koenig-pa presented its software and hardware products at the exhibition stands as well.

For example, one could verify full working capacity and excellent characteristics of our KPA EtherCAT Master at the stand demonstrating compatibility of the Master libraries provided by different manufacturers with the EtherCAT slave devices.

Three EtherCAT slave devices manufactured by koenig-pa GmbH—PCI controllers of the form factor ATX and PC104 as well as the EtherCAT 4CAN gateway were shown in the area of hardware solutions. 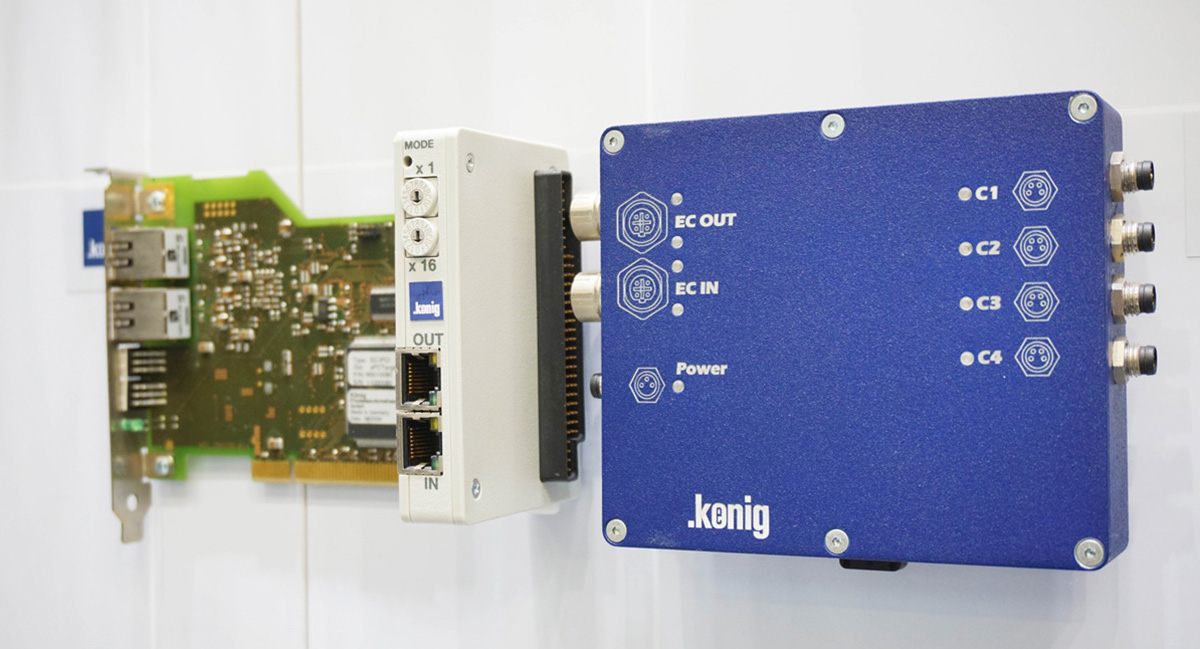 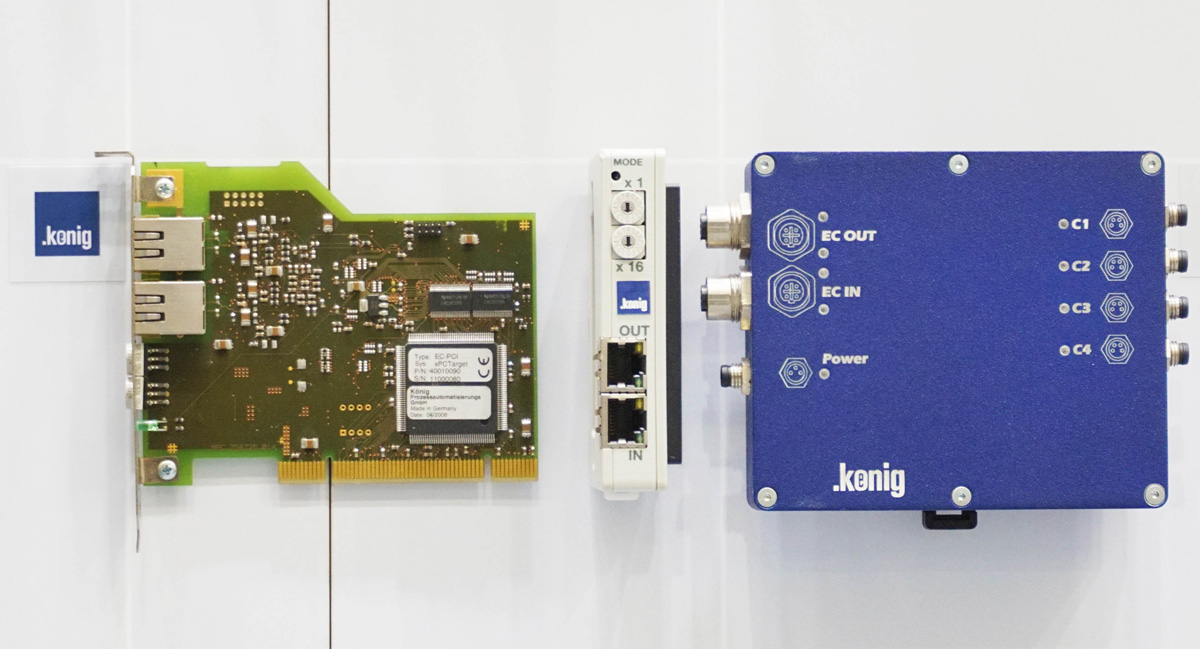 Overall, koenig-pa estimates positively the results of its work at SRC IPC Drives 2017. The visitors showed their interest in samples of the presented equipment. Successful negotiations were conducted with new and existing clients. The company’s order portfolio was supplemented once again. 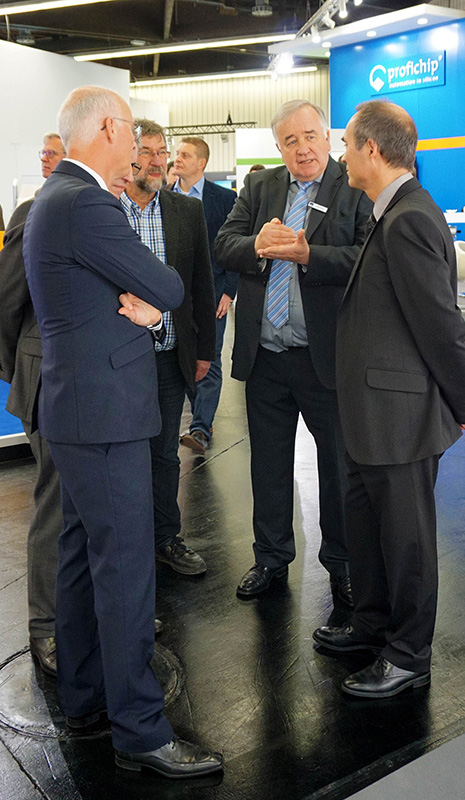 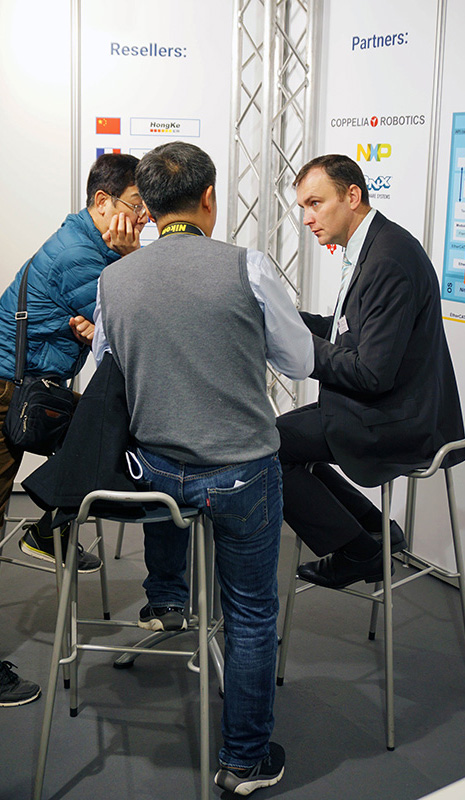 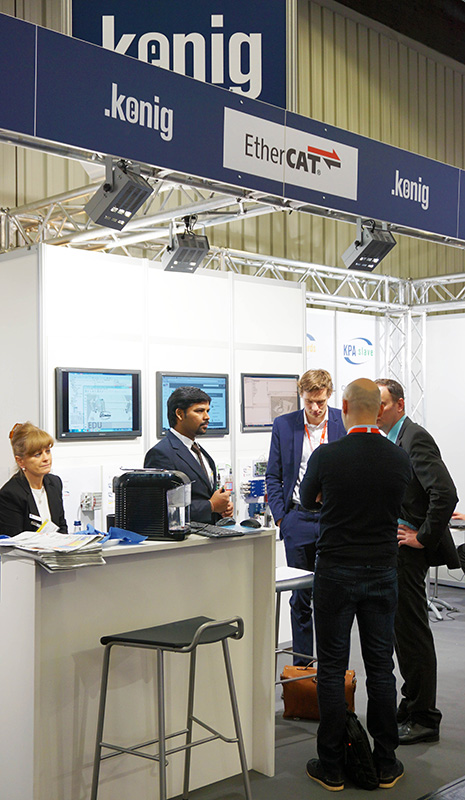 If you have any questions, please feel free to contact us