KPA Motion is a library used in software development for position control devices. KPA Motion is specially designed for the automation industry, medicine, and other application fields, where it is necessary to control the moving parts of machines or robots, e.g. numerical control (CNC) machines. It conforms to the PLCopen specification and does not rely on a specific drive model or vendor, offering a standard motion interface which can be used across various systems. Remote usage of product capabilities is provided by the proxy development kit (PDK). The PDK allows to control drives using a non-real-time OS on the client side, as the motion control performed in a real-time OS on the server side.

KPA Motion is implemented as a library with a “C” interface and is not bounded to any specific CPU architecture. Moreover, the architecture includes operating system abstraction layer (OSAL) which enables adaptation to any operating environment. KPA Motion already supports Windows, Linux, Intime and QNX. More operating systems are in development.

Online generation of the time-optimal trajectory

The online generation of the time-optimal trajectory allows to increase the efficiency of the tasks.

OSAL provides an application programming interface (API) to allow KPA Motion Control Library to take advantage of an Operating System (OS) to run either in OS environment or without one. It is designed to take care of the underlying differences between the OS interfaces.

KPA Motion Control allows the introduction of a custom OSAL implementation and the use of Motion Control capabilities within user’s specific environment.

Bus Abstraction Layer (BUSAL) allows interacting with drivers based on various profiles, such as CiA402/DS402, SERCOS and PROFIdrive. BUSAL is a modular KPA Motion Control component. It introduces an open interface for communication with physical or virtual drives. The BUSAL allows treating moving parts of machines as axes. It consists of several built-in modules. The user can implement own modules to handle any real or virtual equipment as drives.

koenig-pa GmbH is a voting member of PLCopen Group – an independent worldwide organization providing efficiency in industrial automation based on the needs of users. KPA Motion supports PLCopen Control specifications with additional extensions.

KPA Motion library is integrated to KPA Automation softPLC that allows to assign driver control logic by the means of graphic interface without writing code.

KPA Motion is delivered as an archive, which includes documentation, header files, libraries and examples. 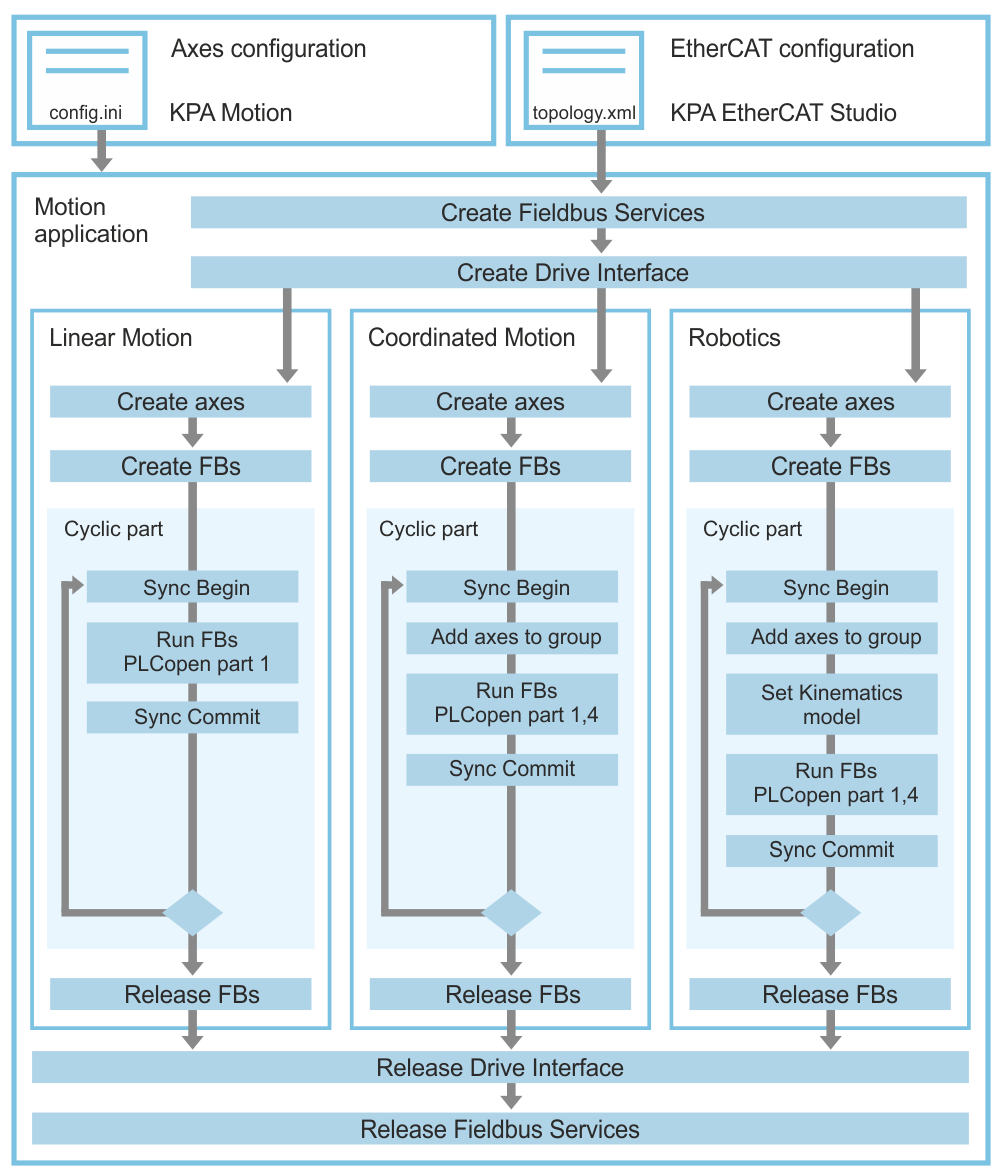 Below are presented the examples of KPA Motion functional blocks.


Aside from the fact that there is the interface for C++ integration in a new application, there is an integrated solution by means of softPLC with these integrated blocks. So, if the user don’t want to integrate motion in its applications it may use ready to go solution represented by softPLC, where these blocks already have been integrated.

Ready to try our KPA Motion?